Manchester United are reportedly advancing in talks for defender Ruben Dias as they seek to bolster their options at the heart of the backline.

The Portuguese has been one of Benfica’s leading performers and he had recently starred for the national side during their Nations League success.

According to Sport Witness, United are making the move to pursue the highly-rated defender with discussions likely to happen in the coming days.

The same publication claims the Red Devils are looking to pay a fee less than the player’s £59m release clause, though that appears unlikely to happen.

At just 22, Dias has become a top performer in the central defensive role and it is not surprising that Benfica are looking to reward him with a new deal to increase his release clause.

As such, Ole Gunnar Solskjaer’s side don’t have much time to ponder about an approach and it appears that they are prepared to open talks with the Primeira Liga giants at the earliest opportunity.

Aside from Dias, United have been linked with a move for Harry Maguire from Leicester City and it remains to be seen whether they are interested in pursuing more than one central defender.

Victor Lindelof has been linked with a surprise move to Barcelona in the past few days and his potential departure from the club could bring up the need for a second central defensive signing. 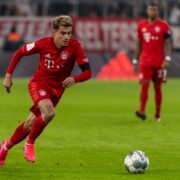