Arsenal have confirmed that Gabriel Martinelli won’t take any part for the rest of the season after undergoing surgery for a knee injury sustained in training last weekend.

The Brazilian has enjoyed a superb breakthrough season with the club where he has bagged 10 goals and two assists. He was an unused substitute against the likes of Manchester City and Brighton & Hove Albion earlier this month and it is now confirmed that he has had an operation which will keep him sidelined for the remainder of the campaign.

Aside from Martinelli, Pablo Mari, Calum Chambers are set to miss the rest of the season. Bernd Leno escaped a serious knee injury but his moderate ligament sprain is expected to keep him out of action for at least four weeks. He may only return for the club’s final fixture of the league season.

Arsenal recently picked up their first win since the restart as they beat Southampton by a 2-0 scoreline on the road. They are scheduled to face Sheffield United in the FA Cup quarter-final on Sunday afternoon. The club have failed to beat the Blades in both of their league meetings this term and Mikel Arteta will be hoping for a better display from his players at the weekend. 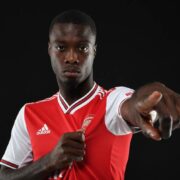