Manchester United will make the trip to Bruges to face Club Brugge in the first leg of their Europa League round of 32 clash. The Red Devils ended a three-match winless streak in the league with a 2-0 triumph over Chelsea on Monday and they now have the chance to build momentum with another victory on the road.

Sergio Romero will definitely start in goal ahead of David de Gea. The Argentine has kept seven clean sheets from nine Cup games this season and he should get a rare opportunity between the sticks.

In the backline, Aaron Wan-Bissaka should be rested with Diogo Dalot taking up his spot. Luke Shaw is likely to revert to his left-back role after playing in a back three on Monday night.

At the heart of the defence, Eric Bailly could drop to the bench, given Solskjaer may not want to burden him with the workload after his recent comeback from a knee injury.

Victor Lindelof, who has overcome his illness, should accompany Harry Maguire at the heart of the defence. Maguire has recently been the standout defender in the United ranks.

Fred has been constantly in the starting XI with different midfield partners since September and he should get a breather on Thursday with Andreas Pereira partnering Nemanja Matic.

In the attack front, Mason Greenwood won’t feature after a minor setback in the lead up to the game. In this case, Juan Mata may get the nod on the right wing with Daniel James on the left while Bruno Fernandes should take up the number 10 position.

Fernandes has impressed with his distribution from set-piece situations and he will be hoping to add to his maiden assist from the Chelsea game. Ighalo is in contention to make his full debut ahead of Anthony Martial, who may be rested with a view to the Watford game.

How Manchester United could lineup against Club Brugge: 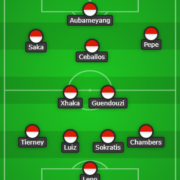