Chelsea FC have reportedly made contact with Paris Saint-Germain regarding a possible loan move for Edinson Cavani before the end of the month.

The Blues have depended on Tammy Abraham for most of the centre-forward duties this term but he has struggled to find the same level of consistency from the early months of the season.

The England international has stood out with 15 goals through the current campaign but Lampard is nonetheless keen on landing an experienced striker, who can provide strong competition to the club graduate.

According to The Times, the west London side have initiated talks with Les Parisiens for Cavani’s signature and they are aiming to land him on a short-term loan for the campaign.

The same outlet indicates that they are prepared to offer a club-record salary of £360,000-a-week salary on top of a £5m loan fee but it is unclear whether Les Parisiens would be tempted by the proposal.

Cavani has less than five months remaining on his contract with the French giants and of late, he has made his intention clear of leaving the club by handing in a transfer request.

As a result, he has been widely tipped to head through the exit door before the end of the month and Les Parisiens seem to be holding out for a permanent sale for around £23m.

Cavani has netted more than 20 goals in each of the past nine seasons with Paris Saint-Germain and Napoli but he has struggled this term with just five goals to date.

This has largely resulted from the limited gametime due to fitness concerns and competition from Mauro Icardi and that has contributed towards his ambition to pursue a fresh challenge.

Should Chelsea FC strike the deal, Cavani should prove a quality competitor to Abraham, particularly with Michy Batshuayi looking out of sorts while Olivier Giroud seems keen on a fresh challenge elsewhere.

Abraham recently sustained an ankle injury in the 2-2 draw against Arsenal at Stamford Bridge and the Blues have yet to reveal the extent of the problem. 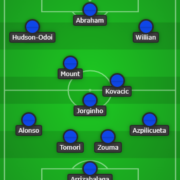