Chelsea FC striker Tammy Abraham has provided an update on his hip injury following the club’s 2-2 Champions League draw against Valencia away from home.

The England international sustained the hip concern during the closing stages of the opening half and he was replaced by Michy Batshuayi immediately after the interval.

Speaking after the game, Abraham indicated that he has been able to walk after the discomfort during the game and he is hopeful that he won’t be out of action for a longer period of time.

“It’s much better, much better than when it happened. At the time I was fearful of the worst obviously, but I got in and was able to walk again, move about. “I’m thankful, hopefully it’s not too long,” he told.

Abraham has been the standout striker for the Blues this season and he has already contributed 11 goals across all competitions in addition to three assists for his teammates.

The marksman is expected to undergo a scan tomorrow and manager Frank Lampard will be hoping that the club graduate has not suffered anything more than a bruise. 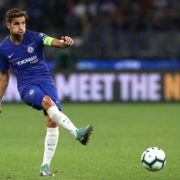