Home
Chelsea
‘Special talent’, ‘his movement is quality’, these Chelsea FC fans are delighted after 21-year-old’s display vs Valencia

Some Chelsea FC have expressed their delight after Christian Pulisic came up with another standout performance in the 2-2 draw against Valencia on the road.

The Blues went into the Champions League meeting with the better run of form compared to Valencia but the Spanish side managed to open the scoring in the 40th minute.

However, the lead was nullified in the matter of seconds through Mateo Kovacic and following the break, Pulisic gave the Blues the advantage with a wonderful poacher’s effort in the 50th minute.

The goal was his sixth from seven appearances for the Blues but it was not sufficient to hand the victory as Daniel Wass showed a stunning late goal from the right flank.

Here are some of the reactions over Pulisic’s performance:

Pulisic was a regular presence in the attack and he was prepared to carry the ball forward with the intent of making things happen. The attacker nearly assisted Mateo Kovacic for another goal in the opening half and following the interval, he had another close range chance where he could not sort his feet out in the box.

Still, he can’t be blamed for the overall result on the night and the Blues players should be pleased with the outcome, given Los Che could have quite easily won the game on some other day.

The Spanish outfit squandered as many as four clear-cut chances and one of those came right before the final whistle. There was also a missed penalty from last season’s Europa League semi-finalists.

Chelsea FC will definitely cement their place in the knockout stage of the Champions League, should they beat French side Lille in the final matchday of the group phase. 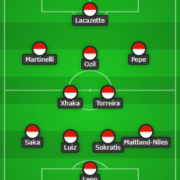