Chelsea FC are reportedly planning to hand new contracts to four of their club graduates including Tino Anjorin, who has been making a huge impression with the club’s development squad.

Blues boss Frank Lampard has trusted the youth at the club amidst the transfer ban and it has certainly paid dividends with the west London side enjoying a bright start to the league campaign.

According to Metro, the Blues are prepared to continue with the progress of rewarding young players with long-term deals and four of their graduates are in line for contract extensions.

Tammy Abraham and Fikayo Tomori have excelled for the Blues in the centre-forward and central defensive positions this term and the England internationals are set to be rewarded with improved contracts.

Similarly, Reece James has settled impressively over the past month and he was exceptional during the recent league clash against Crystal Palace where he completely negated the threat from Wilfried Zaha.

Alongside James, Anjorin is another young graduate in line for a contract renewal. The 17-year-old attacker has made just one appearance in the League Cup for the Blues this term but he is highly regarded by the coaching staff and believe he could be a future superstar. 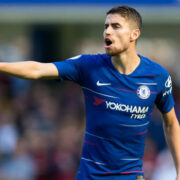