Manchester United face Newcastle United on the road in Sunday’s Premier League meeting. The Red Devils have experienced a tough beginning to their league campaign and they have racked just two wins from the opening seven games.

Compared to the Red Devils, the Magpies have had more troubles as they languish in the drop zone with just one win this campaign. Irrespective of this, Ole Gunnar Solskjaer’s side have a testing challenge on their hands, given they are winless away from home in the past 10 matches across all competitions.

David de Gea will no doubt feature in goal against the Magpies and he will be aiming for only his third clean sheet on the league campaign. The backline should remain the same from the Arsenal clash with Ashley Young and Axel Tuanzebe in the full-back roles while Victor Lindelof should continue to partner Harry Maguire.

In the midfield, Scott McTominay will be expected to start. The Scotland international showed a good workrate against the Gunners where he scored a wondergoal and he is probably the only midfield player in the United ranks, who has shown some consistency this term. Nemanja Matic is likely to partner him with Paul Pogba on the sidelines while Fred has been out-of-favour for a starting role in the league.

In the attack front, we are anticipating a couple of changes from the Gunners clash. Mason Greenwood could take the right-wing role ahead of Andreas Pereira whilst Juan Mata may feature in the number 10 role ahead of Jesse Lingard, who is out with a hamstring issue. 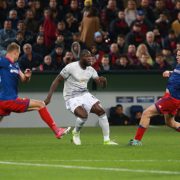