Chelsea FC star Willian has backed striker Tammy Abraham to help the Blues in overcoming the departure of Eden Hazard during the current campaign.

Abraham started the season on a slow note with no goals in the opening three games and he came under severe criticism from a section of the supporters on social media.

However, he has managed to transform his fortunes thereafter with seven goals from four appearances and he is now regarded as the go-to man in the club’s attack.

Speaking to Goal.com, Willian acknowledged that Hazard’s exit has undoubtedly been a big loss for the west London giants but there are players within the squad to fill the void.

He added to give a special mention for Abraham, who has proved his doubters wrong with the scintillating run of form since his penalty miss in the European Super Cup final.

“Abraham is playing well at the moment. He is scoring lots of goals and I am very happy for him. The young players are doing well. They can improve a lot,” he added.

Abraham earned a penalty for the Blues during the Super Cup clash against Liverpool FC last month, but he could not contribute any more than that as he struggled with his finishing.

He is currently in a better frame of mind when it comes to approaching the opposition goal and it remains to be seen whether Abraham can come up with a strong display against the Reds in the league on Sunday. 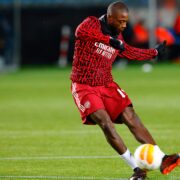