Arsenal, Liverpool and Manchester United have received a transfer boost after Ajax sporting director Marc Overmars confirmed that Hakim Ziyech would be heading through the exit door this summer.

The Morocco international has enjoyed a standout spell with Ajax this term and his tally of 21 goals and 24 assists has helped them secure a domestic double while reaching the semi-final phase of the Champions League.

Owing to this, his reputation has increased significantly from previous years and Overmars has indicated that the winger will leave at the right price during the summer transfer window.

“He leaves when a top club comes. He is in focus because of his achievements in the Champions League. Many big clubs are buzzing around him. We promised Hakim [that we would] agree to a good transfer,” he said.

Ziyech is currently attracting interest from the likes of Arsenal, Liverpool and Manchester United in the Premier League while there has also been links with both Bayern Munich and Borussia Dortmund.

Ajax are said to value the Moroccan at around £35m after his recent exploits, but the final transfer price could be upped further, should there be a transfer tussle between the teams. 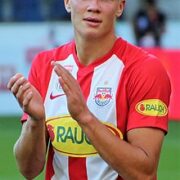