Chelsea are scheduled to face Newcastle United at the Bridge during the weekend’s Premier League clash. The Blues are currently holding a slender three-point advantage ahead of Arsenal for the final Champions League spot and anything less than a win against the Magpies may potentially nullify the gap between the London rivals.

Kepa Arrizabalaga has been the undisputed choice when it comes to the Premier League duties in goal and he should without doubt feature against the Magpies on Saturday evening.

In the defence, Sarri is unlikely to tinker with the regulars and this should witness Cesar Azpilicueta and Marco Alonso on the right and left-back positions with David Luiz and Antonio Rudiger featuring once more at the heart of the club’s backline.

In the midfield, the manager is likewise expected to stick with Jorginho in the holding midfield role while N’Golo Kante and Mateo Kovacic should once more take their positions ahead of the Italian in a three-man combination.

Upfront, Olivier Giroud is not entirely up to match fitness after his recent ankle injury and this may witness him stay on the bench alongside Alvaro Morata, who has been out-of-favour under Sarri of late.

In this case, we are fancying Pedro and Willian to feature on the left and right side of the Blues’ attack with Eden Hazard taking up the central role which he has become more accustomed of playing as the season has progressed. 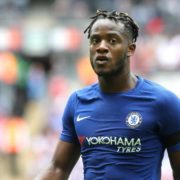